Office of Finance and Administration

Matt Grossell (R) House 02A and Justin Eichorn (R) Senate 5 were members of bonding committees which included the project in the state’s bonding bill, signed into law by Gov. Mark Dayton on May 30. Matt Bliss (R) House 05A has long been a vocal proponent of the project.

“It was amazing to see the outpouring of support not only from the faculty and staff, but from the community here for this project, and I think that’s one thing that really helped us get this over the finish line this year and get Gov. Dayton’s signature,” Eichorn said.

Grossell said the project will help fill an obvious need for BSU.

“This was something that should’ve been done awhile ago,” he said. “We got the opportunity to keep pushing it forward, and it was time to get it done.”

Karen Snorek, BSU’s vice president for finance and administration, said that activity to begin the project started quickly after the university learned Gov. Dayton had signed the bonding bill.

“We learned that the bill had been signed at about 10:30 in the morning, and by 1:30 that afternoon we were meeting with architects,” she said. “Our goal is to start in August or September, and we hope to do some work over winter break between Dec. 20 and Jan. 20. So we have a lot of work to do in our other buildings to get ready to empty this building and then tear it down. Our ultimate goal is still the same goal — which is to reopen in Fall 2020.”

Travis Barnes, BSU’s director of facilities, said the university will be able to successfully host classes in other buildings on campus while the new Hagg-Sauer Hall is being rebuilt during the 2019-2020 academic year.

“With the space utilization we have on campus, and running it through our software system, we’re able to juggle the classes and make it work,” he said.

Your input is valued throughout this process. If you have questions regarding the renovation projects, please submit them here to Karen Snorek, Bemidji State’s Vice President for Finance and Administration. All questions will be reviewed and answered weekly. 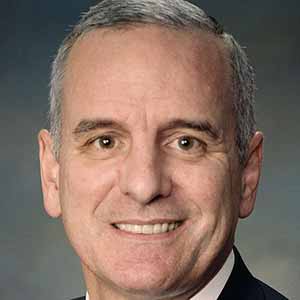 Bemidji State University reached a significant milestone in a years-long effort to replace the aging Hagg-Sauer Hall when Minnesota Gov. Mark Dayton (right) signed the state’s bonding bill into law on May 30.

The $1.57 billion bill appropriates $22.512 million for the project, which calls for Hagg-Sauer to be demolished and replaced with a smaller, classroom-focused facility, and for renovations to spaces in five other buildings on campus.

Replacing the existing 82,000-square-foot Hagg-Sauer Hall, now nearly 50 years old, with a 28,000-square-foot classroom-focused facility will allow BSU to create groups of faculty offices in learning communities of related disciplines. These focused communities will create better environments for students to meet with faculty — and each other — outside of the classroom.

The proposed academic learning center, which will be finalized in the coming months as university officials meet with architects to develop construction plans, includes 10 state-of-the-art teaching spaces on two floors designed to accommodate a variety of course types and learning styles. Classrooms will range in size from 40 to 132 seats, and the building also will include an auditorium that can accommodate lecture classes with as many as 320 students.

The project also will feature native plant landscaping to reduce water usage and better manage drainage as part of the university’s ongoing commitment to sustainability and the preservation of Lake Bemidji. The building is being designed to maximize energy efficiency and to emphasize natural lighting. An all-glass eastern wall will overlook Lake Bemidji, and the building’s smaller footprint will create a newly unobstructed view of the lake from the heart of campus.

Renovations are slated for the Bangsberg Fine Arts Complex, Bensen and Sattgast halls and the A.C. Clark Library. Those planned renovations include: 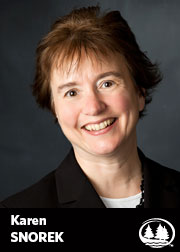 While a specific timeline for the project won’t be finalized for several weeks, Karen Snorek, BSU’s vice president for finance and administration, says the project’s renovation phase could begin as early as December. Hagg-Sauer Hall could be demolished as soon as July 2019 with the goal of having the new Academic Learning Center open for classes in Fall 2020.

The university has been pursuing the Hagg-Sauer replacement project for several years. BSU received $1 million from the legislature in 2014 to plan the construction and renovation, when the project was ranked third on the Minnesota State system’s priority list for construction. That session ended without a bonding bill, and the project became the system’s top construction priority heading into the 2018 legislative session.

Governor Dayton has been vocal in his support for the project. It appeared in his January 2018 bonding proposal, which included a total of $1.5 billion for construction projects across the state. The project also appeared in the Governor’s pre-session bonding priorities lists in 2014, 2016 and 2017. There was no proposal in 2015, as the state typically considers bonding bills every other year.

BSU’s Hagg-Sauer Hall project is part of $129 million allocated to the Minnesota State system in this year’s bonding bill. It includes $45 million for system-wide asset preservation and funding for projects at nine other campuses in the system:

Your input is valued throughout this process. If you have questions regarding the renovation projects, please submit them here to Karen Snorek, Bemidji State’s Vice President for Finance and Administration. All questions will be reviewed and answered weekly.

Office of Finance and Administration