As advances in computing and digital imaging  get closer to the promises of creating real-time alternate or augmented realities, what ethical considerations might these devices bring? Are there challenges that come from how we relate to each other when we can’t know what sort of images or information are being projected in front of the people we are interacting with? 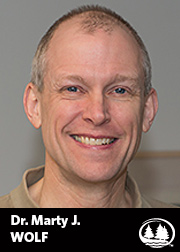 Dr. Marty J. Wolf, a professor of computer science at Bemidji State University, explores the ethical considerations surrounding not only the latest wave of augmented-reality devices such as Google Glass, but what future versions of this technology might hold, as part of BSU’s Honors Council Lecture Series.

Wolf’s presentation, “Augmented Reality in Your Eye: Google Glass, Space Glasses, and Beyond,” will be held Feb. 3 at 7 p.m. in Hagg-Sauer 112. Honors Council lectures are open to everyone free of charge.

Wolf’s presentation, originally given with several colleagues at the Computer Ethics Philosophy Enquiry conference in Paris, will address the impact of augmented visual-field devices and explain current technology, including a demonstration of Google Glass, and consider potential advances in the technology.

He will argue that Plato’s Allegory of the Cave, in which Plato explains how the lens through which an individual views the world can have dramatic impacts on how that individual perceives reality, is influential when discussing augmented reality and the ethical considerations surrounding its use.

“Do we design these things so that when you and I are in the same room having a conversation or when we’re near one another, I get to see what you see and you get to see what I see?” Wolf asked. “Today, when we pass each other on the street, I know what you’re seeing, more or less. Might there be an argument that we ought to design these devices so our expectations and experiences largely remain the same?

“Or,” he asks, “Do we demand that people change so that they can no longer make the assumption that those near one another are all experiencing approximately the same world at any particular moment?”

Dr. Marty J. Wolf is a professor of computer science at Bemidji State University. In addition to over 25 years of experience teaching undergraduate computer science, he has engaged in a variety of collaborative research. His early research was in theoretical computer science. Later, as a Visiting Fellow at the Australian National University his work began to take on an interdisciplinary flavor when he worked on problems in bioinformatics. Since then he has had work published in graph theory and computer ethics. Wolf’s current work focuses primarily on information ethics and the philosophy of information and computation.

Bemidji State University offers more than 50 undergraduate majors and nine graduate programs encompassing arts, sciences and select professional programs. BSU is a member of the Minnesota State Colleges and Universities system and has a faculty and staff of more than 550. University signature themes include environmental stewardship, civic engagement and global and multi-cultural understanding.