Bemidji State University President Richard A. Hanson challenged nearly 500 students at a campus-wide gathering Thursday to confront the dangers of alcohol abuse, and they shared their ideas for improving safety and promoting responsible behavior. 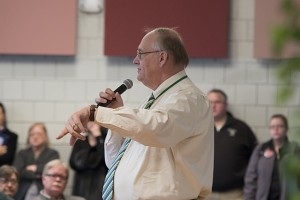 President Hanson talks with students during the BSU Summit on Alcohol and Student Safety.

Following a Bemidji State student’s alcohol-related death in December and a second serious incident this month, Hanson invited students, faculty and staff to attend the unprecedented “Campus Summit on Alcohol and Student Safety,” held at 10 a.m. in the university’s large Beaux Arts Ballroom.

“I wanted to make this issue an issue,” Hanson told the crowd. “I wanted people to come together and say, ‘What’s going on, what’s happening, why is it happening, and what can we do to stop it?’”

He stressed the dangers of binge drinking, the ethics of personal responsibility and the importance of looking out for the welfare of others. Two BSU staff members also spoke, reviewing the university’s current strategies for alcohol education and prevention, which include a required freshman course, alcohol-free events and alcohol prohibition in residence halls.

Before engaging the audience of students and employees in a dialogue, he announced formation of a joint university-community task force to develop a systemic approach to addressing the safety threat posed by alcohol abuse. The task force, to include students, will be guided in part by an upcoming student survey to better understand alcohol-related behaviors and attitudes, Hanson said.

Students spoke about their own experiences with alcohol at off-campus house parties characterized by consumption of hard liquor. They cited a need for increased availability of late-night transportation for inebriated students, which Hanson said the university is working on, as well as the assurance they could contact local law enforcement for help without fear of prosecution. They also encouraged one another to think in advance about the risks of alcohol for themselves and others.

Hanson himself put his greatest emphasis on the shared responsibility students have as members of communities that exist at many levels – ranging from the entire campus down to a small group of friends.

Learning how responsibility should impact behavior, Hanson said, is a critical part of students’ learning experience at a residential campus like Bemidji State.

“It’s part of your journey — part of why you’re here — to gain the confidence to exercise that responsibility,” he said. “That must carry over to your behavior and to drinking.”