Dr. Anton Treuer, executive director of Bemidji State University’s American Indian Resource Center, has announced that he will step away from his position and return to the BSU faculty, effective at the end of this academic year.

“I agonized about this because I really love and value both positions,” Treuer said. “The bottom line is, my primary passion is teaching our students and working with language and culture. This change is more about how I can be most effective at the things that I am not only best at, but that I am most passionate about. This will help me keep my focus as sharp as possible on those things.”

Treuer says that in addition to revitalizing his passion for working directly with students in the classroom, he also looks forward to participating in the university’s increasing efforts to reach beyond campus and engage students in the broader northern Minnesota region.

“There has been a lot of change here, and through some of the grants we’ve had and some of the partnerships we’ve forged, the Ojibwe program is going to be growing,” he said. “For example, Red Lake has just launched an Ojibwe immersion program and they have need for teachers with language skills and teaching credentials. The question becomes, how can we provide that? This is the kind of thing BSU can do to meet the needs of our greater community as a regional university.”

Treuer will continue to be extensively involved in the center’s primary projects, including work done as part of the university’s Imagine Tomorrow campaign, exploration of an Ojibwe teacher training program, and continuation of work that has begun on equity and truth-and-reconciliation efforts both at BSU and in the Bemidji community.

“I believe in what we’re doing here,” he said. “I will give extra time and effort there even if it’s beyond the normal expectations for faculty.” 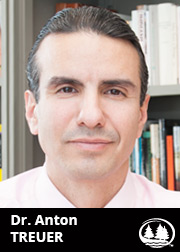 About Dr. Anton “Tony” Treuer
An internationally renowned expert on issues such as cultural and language preservation, Dr. Anton Treuer has written 13 books is a regular presenter at conferences and workshops. His book, “Ojibwe in Minnesota” was named Minnesota’s Best Read by the Center for the Book at the Library of Congress in 2010. He edited “Awesiinyensag: Dibaajimowinan Ji-gikinoo’amaageng,” an Ojibwe-language children’s book that was named Minnesota’s Best Read for 2011. In 2012, he won the Award of Merit from the American Association of State and Local History for his book, “The Assassination of Hole in the Day.”

Treuer’s other books include “Everything You Wanted to Know About Indians But Were Afraid to Ask,” “Ezhichigeyang: Ojibwe Word List,” “Living Our Language: Ojibwe Tales and Oral Histories,” “Aaniin Ekidong: Ojibwe Vocabulary Project,” “Indian Nations of North America,” “Omaa Akiing” and “Atlas of Indian Nations.” He also is editor of the “Oshkaabewis Native Journal,” the only academic journal of the Ojibwe language.

Treuer spent 12 years on the faculty in Bemidji State’s Department of Languages and Ethnic Studies before being named executive director of the American Indian Resource Center in November of 2012.

At BSU, he taught Ojibwe language courses and classes on Ojibwe culture, history and literature. Prior to joining the BSU faculty, Treuer spent four years as an assistant professor of history at the University of Wisconsin-Milwaukee.

Treuer is a member of the Minnesota State Arts Board and has served on the boards for the White Earth Land Recovery Project and the Sanford/MeritCare health system. He has received dozens of awards and fellowships from organizations including the American Philosophical Society, the National Endowment for the Humanities, the National Science Foundation, the MacArthur Foundation, the Bush Foundation and the John Simon Guggenheim Foundation.

Treuer has a bachelor’s degree from Princeton University and holds master’s and doctorate degrees from the University of Minnesota.

BSU plans to have a new director in place by July 1 and a national search for Treuer’s successor is already underway. Applications are being accepted until March 1.