Bemidji State University’s Chamber Singers are heading to New York for a performance at Carnegie Hall.

The Chamber Singers are joining choirs from Fountain Valley (Calif.) High School Vocal Music and Saint Mary’s College of California Chamber Singers and Glee Club for the Gotham SINGS! Choral Showcase on April 18. The concert will begin at 8:30 p.m. on the Perelman Stage of Carnegie’s Stern Auditorium.

This annual series presents outstanding bands, choirs, orchestras and music programs in world-class venues throughout New York City. This event features specially invited ensembles in a 30-40 minute solo performance on the Carnegie Hall Main Stage under the direction of their own ensemble conductor or conductors. Repertoire is varied and showcases the abilities and talents of the invited ensembles. 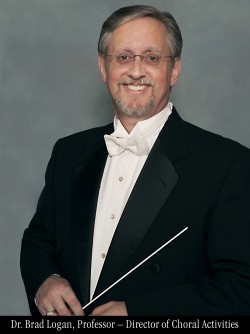 “Performing at Carnegie Hall is a bucket list-type activity for musicians,” said Dr. P. Bradley Logan, professor of music at Bemidji State and director of the Chamber Singers. “The opportunity to perform in an internationally-recognized hall of excellence is something that brings great fulfillment to both the singer and the director.”

The concert is being coordinated by Sechrist Travel, which has worked with Logan and the BSU choirs in the past to provide travel arrangements for the group’s European tours. The tour is being funded primarily by members of the choir with some support from the Department of Music’s Madrigal Dinner fund.

“The students were honored and thrilled, because I don’t think any of them have performed at Carnegie before,” Logan said. “This will be new for everyone.”

To prepare for the concert, Logan says the Chamber Singers will have a larger-than-normal role in this year’s spring choir tour, which begins March 25 in Duluth, and the tour will feature about 75 percent of the material to be performed at Carnegie Hall. The Chamber Singers also will perform an April 8 concert in Bemidji as part of the closing activities for the university’s annual Student Scholarship and Creative Achievement Conference.

“This will showcase what we do,” Logan said. “If there are students who want to come to Bemidji State, what we will do at Carnegie Hall is what we do here on a regular basis.”

Tickets
Tickets for BSU’s performance at Carnegie Hall are available directly from the hall; available seats range from $29-80. Visit carnegiehall.org for details.

The Chamber Singers
The Chamber Singers is an ensemble of 18 singers chosen by audition from The Bemidji Choir. They specialize in literature for small choirs, such as English carols, renaissance madrigals and chansons, and a wide variety of contemporary works. During fall semester the Chamber Singers serve as the Royal Court for BSU’s annual Madrigal Dinners.