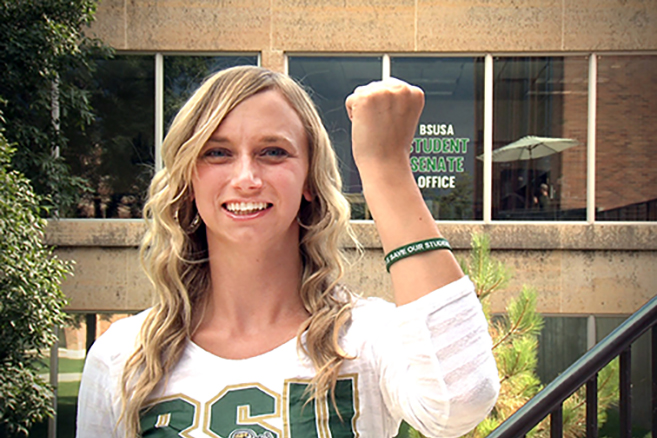 Student Senate President Brittany Hull shows off her Save Our Students bracelet in a student-produced video titled “Who’s Got Your Back?: No Buddy Left Behind.”

This year celebrating its 30th anniversary, the Minnesota Campus Compact summit brings together a variety of community involved collaborators among higher education to celebrate the good work already being done across the state and to consider ways of building on that work for a greater impact. Every year as a part of this initiative member presidents and chancellors are invited to give statewide recognition to civic engagement leaders in three categories.

The Presidents’ Student Leadership Award is for an individual student or a student organization that models a deep commitment to civic responsibility and leadership, evidenced by initiative, innovative, and collaborative approaches to addressing public issues, effective community building, and integration of community collaboration into the college experience.

A Litchfield, Min. native, Hull is a senior in the four-year nursing program at BSU. As the student senate president, she has been actively involved in the alcohol awareness taskforce and S.O.S.— Save Our Students— program on campus. By speaking to students in classes and orientations about the events of last year and how to prevent it from ever happening again as well as sharing more than 5,000 green “S.O.S. Save Our Students” wristbands and the “No Buddy Left Behind” short film, she has been promoting the buddy system with students all across campus.

“I think it means a lot more coming from one student to another. I can relate. I’ve been in those situations before,” Hull said. “I’ve gone out with friends and seen what can happen, especially when it gets cold.”

About Save Our Students
The task force started meeting last year, not long after 20-year-old Sandra Lommen died the morning of Dec. 10, having fallen into a creek as she walked home alone from a party. Where she was discovered, showing signs of hypothermia and intoxication, the first-year nursing student was a mile and a half from her dorm.

Six weeks after Lommen was found, and one week after another student, Hannah Rolschau, was hospitalized after a similar incident, Hanson invited the campus community to a summit that would blend brainstorming with grieving, sorrow with hope. That night, Jan. 29, Hanson announced the formation of the task force.

Hanson wasn’t sure how many people would show up to that Thursday night summit—he feared there would be none, he said, until he saw 500.

During the spring semester, about 25 people met at 7 a.m. every Wednesday—an assemblage of students, staff, administrators and law enforcement. They looked at strategies used by other schools and tried to incorporate what would work best at BSU. In May, they submitted 38 recommendations to the president.

Besides the wristlets and the awareness video, the school is in the process of forming a shuttle that students could take from downtown back to campus as a safer alternative.

As a result of this tragic event on campus, the awareness initiative has created a sense of community that has brought together everyone on campus. Reports of incidents involving alcohol are now down about 25 percent from last year on and off campus.