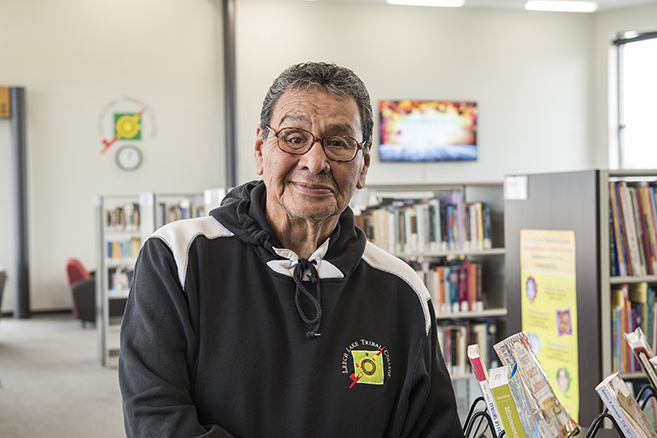 His Ojibwe name, Bezhigoogahbow, means “the one who stands alone,” but Larry Aitken truly stands tall among many. A multitude came together in September to honor their tribal historian, elder and spiritual advisor for founding Leech Lake Tribal College. They bestowed his name on the school’s new library, Bezhigoogahbow Agindasoowigamig.

Aitken’s vision of a higher education institution serving the Leech Lake Band of Ojibwe emerged more than 25 years ago. He recognized a need for a facility to train a tribal police force, one he said would have “brown faces in blue uniforms.” Because the Leech Lake reservation covers 928 square miles, sheriff deputies frequently found their response times too slow.

Since the college opened in 1990, its curriculum has expanded to encompass associate degrees in law enforcement, business management, early childhood development, indigenous leadership, liberal education, natural science and forest ecology, as well as diploma programs in electricity and carpentry. Enrollment at the nationally accredited institution now tops 350 students, with more than 60 faculty.

“Out of nothing came something good,” Aitken said during a naming ceremony for the $2.7 million facility. “It was a very special honor.”

The LLTC library went from a 900-square-foot single room to a contemporary building whose 8,000 square feet houses a collection of books and digital resources, provides homework and research assistance and accommodates student needs for computers, iPad stations and private study areas, as well as group meeting spaces.

Aitken, who graduated from BSU in 1974, teaches Ojibwe at the college near Cass Lake, where he and his wife, Polly, live and raised three children.