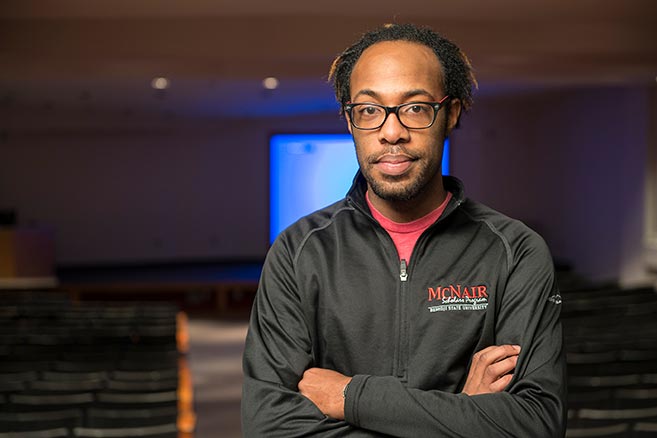 Kenneth Bentley launched his career in photography by specializing in portraiture, work that allowed him to play with details and lighting to capture the humanity of his subjects.

He studied visual arts at a Philadelphia high school where he enjoyed drawing people, using pencil and paper to explore the human form. Now a senior at Bemidji State University, Bentley uses words and ideas to explore a bigger canvas of how social order, culture and institutions shape people’s lives.

A native of Philadelphia, he enrolled at BSU after he moved with his family to Laporte. He started with a degree in sociology and then added minors in leadership studies and mass communication.

“When I was doing photography, I thought, ‘This is fun,’’’ Bentley said. “But I wanted to know more about the people in my photos. For a long time, I was completely against going to college, but I wanted a career change, and I started reading a lot about sociology.”

Now he plans to pursue a doctorate in sociology, possibly to teach at the college level. At BSU, he participates in the Undergraduate Teaching Assistant program. His dream job would be to teach a course on the culture of hip hop, a style of urban popular music featuring rap with an electric backing.

“Hip hop has its own language about life,” Bentley said.  “It’s a part of the history of our times, a way for people to express what’s going on in their communities.”

As a first-generation college student, he is a TRiO McNair Scholar. His research interests include cultural trends across historical time periods and how media reflects or influences culture. He’s also done a sociological exploration of hip-hop culture. His other interests include poverty in urban and rural areas, incarceration in America and gender politics. On a recent visit to Philadelphia, he undertook a photojournalistic study of poverty on urban streets.

“Kenneth has been a welcome addition to the leadership program,” said Dr. Dennis Lunt, director of leadership studies. “He is an open-minded and serious thinker who has a bright future.”

Bentley has presented his research at the Sociologists of Minnesota annual meeting in St. Cloud, the BSU Student Scholarship and Creative Achievement Conference and at a McNair Research Conference at Florida International University in Miami.

“Everything that I chose to do academically has been aimed at self-improvement,” said Bentley, who finds he is a scholar at heart. “Five or six years ago, I never would have thought about presenting or all the things that I’ve done at Bemidji State.”