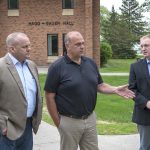 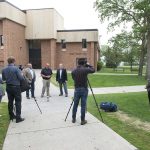 Matt Grossell (R) House 02A and Justin Eichorn (R) Senate 5 were members of bonding committees which included the project in the state’s bonding bill, signed into law by Gov. Mark Dayton on May 30. Matt Bliss (R) House 05A has long been a vocal proponent of the project.

“It was amazing to see the outpouring of support not only from the faculty and staff, but from the community here for this project, and I think that’s one thing that really helped us get this over the finish line this year and get Gov. Dayton’s signature,” Eichorn said.

Grossell said the project will help fill an obvious need for BSU.

“This was something that should’ve been done awhile ago,” he said. “We got the opportunity to keep pushing it forward, and it was time to get it done.”

Karen Snorek, BSU’s vice president for finance and administration, said that activity to begin the project started quickly after the university learned Gov. Dayton had signed the bonding bill.

“We learned that the bill had been signed at about 10:30 in the morning, and by 1:30 that afternoon we were meeting with architects,” she said. “Our goal is to start in August or September, and we hope to do some work over winter break between Dec. 20 and Jan. 20. So we have a lot of work to do in our other buildings to get ready to empty this building and then tear it down. Our ultimate goal is still the same goal — which is to reopen in Fall 2020.”

Travis Barnes, BSU’s director of facilities, said the university will be able to successfully host classes in other buildings on campus while the new Hagg-Sauer Hall is being rebuilt during the 2019-2020 academic year.

“With the space utilization we have on campus, and running it through our software system, we’re able to juggle the classes and make it work,” he said.