When Gov. Mark Dayton signed Minnesota’s 2018 state bonding bill into law on May 29, Bemidji State University took a major step toward completion of a brand new Hagg-Sauer Hall and renovation of four other academic buildings by Fall 2020.

After more than five years of planning and delay, the $825 million bonding bill adopted by the Minnesota Legislature included $22.5 million to demolish the existing 48-year-old Hagg-Sauer Hall and replace it with a new, smaller and state-of the-art learning center on the same lakeshore site. The project also will fund significant upgrades in the A.C. Clark Library, Bangsberg Fine Arts Complex and Bensen and Sattgast halls that include study spaces adjacent to faculty offices.

Classrooms in the original 82,000-square-foot Hagg-Sauer building, completed in 1970, have poor wheelchair access, lack flexibility for group study and are not outfitted with modern interactive learning technology. The lakeshore building has also been plagued by basement water seepage, contributing to more than $9 million in deferred maintenance.

The new building, just 27,700 square feet, will have a variety of flexible learning spaces and state-of-the-art technology. Its energy-efficient design features extensive windows overlooking Lake Bemidji and native plant landscaping that will connect with the expanse of Lakeside Lawn.

Plans call for Hagg-Sauer to be demolished as soon as July 2019, with the goal of having the new building open for classes in Fall 2020.

The Minnesota State Colleges and Universities Board of Trustees voted March 2 to name Dr. Devinder Malhotra as chancellor of the Minnesota State system through 2021. Malhotra, who had served as interim chancellor since August 2017, was permanently appointed after the board turned down three finalists. 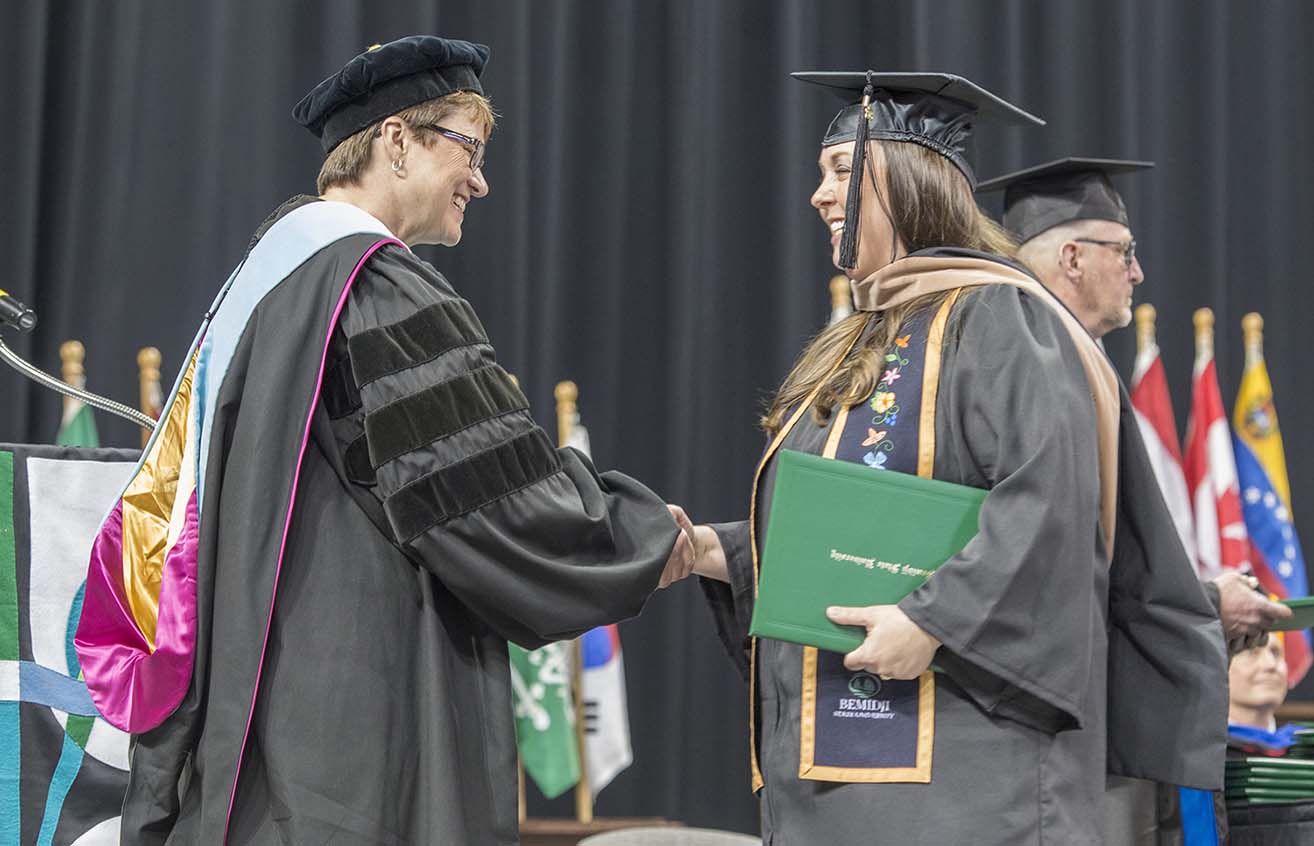 Fifty-six American Indians were among nearly 1,100 graduates invited to Bemidji State’s 99th Commencement, held May 4 in the Sanford Center arena. Previously, the most native graduates in a single year was 43, in 2016.

BSU Professor Emeritus of English Will Weaver delivered the Commencement address as the recipient of BSU’s 36th Distinguished Minnesotan award. He challenged the Class of 2018 to be open to surprise and chance and remain aware of people around them. Also addressing the Class of 2018 were Daniela Maltais, a graduating psychology major from Bemidji, President Faith Hensrud, Minnesota State Trustee Roger Moe and BSU Alumni & Foundation Board President Peggy Ingison.

Commencement has grown so large since moving to the Sanford Center in 2010 that, for the first time, BSU required tickets for admission. Each graduating senior was allocated four tickets, and the Records Office was able to accommodate students who required additional seating for their families. According to the Sanford Center, 3,354 people attended this year’s ceremony. 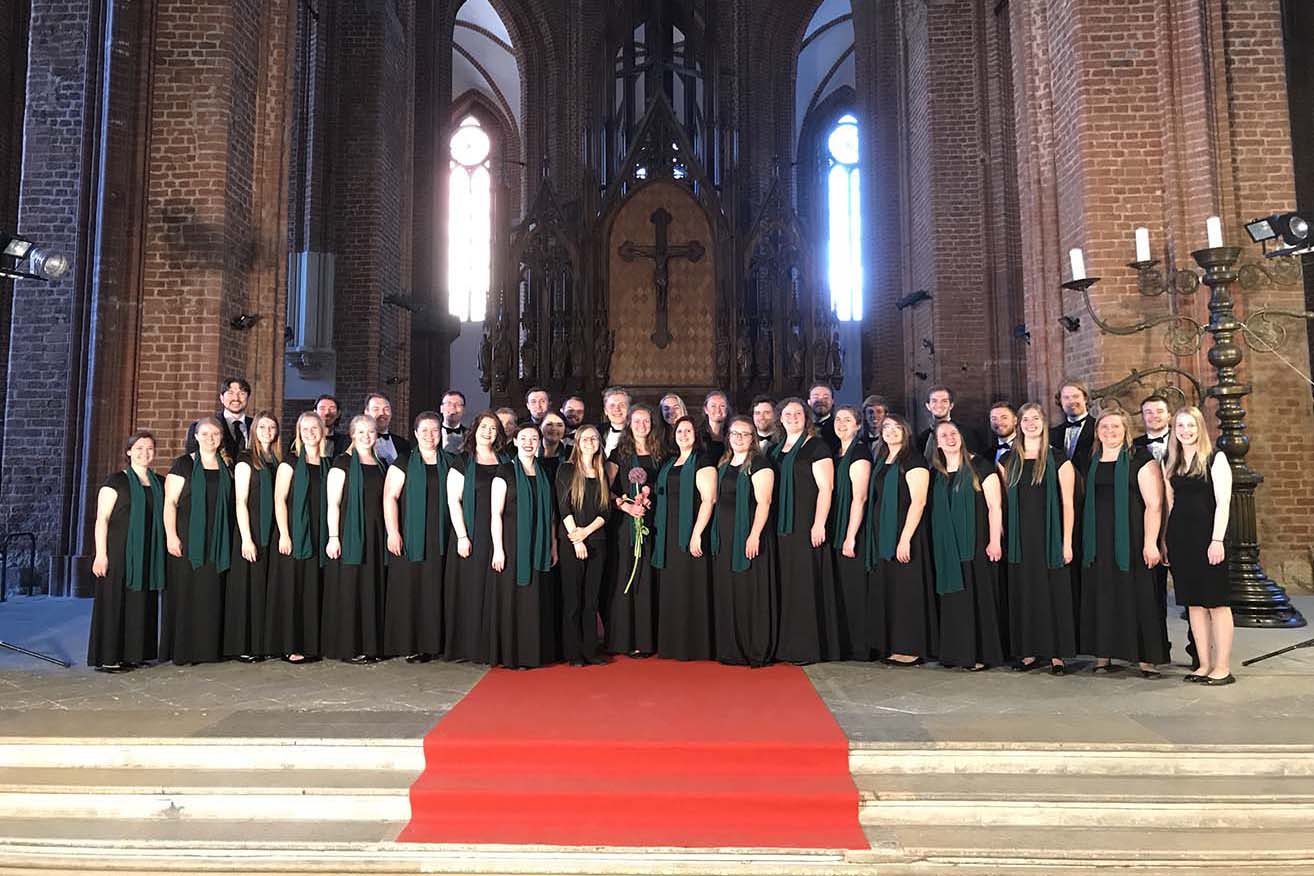 The Bemidji State choirs began their summer with a six-day European tour, performing in the Baltic states of Latvia and Estonia under the guidance of Dr. Dwight Jilek, assistant professor of music and director of choral activities.

The BSU tour, which was part of the American Celebration of Music concert series, opened May 12 with a performance at St. Peter’s Church in Riga, a building that dates to the 13th century. On May 13, the choir performed at St. Anna’s Lutheran Cathedral in Jelgava, Latvia. The tour concluded May 15 with a performance at the Tallin Dome Church, completed in 1240.

The choirs chose the Baltics as a destination partly thanks to a BSU residency in March by internationally renowned Latvian composer Ēriks Ešenvalds. 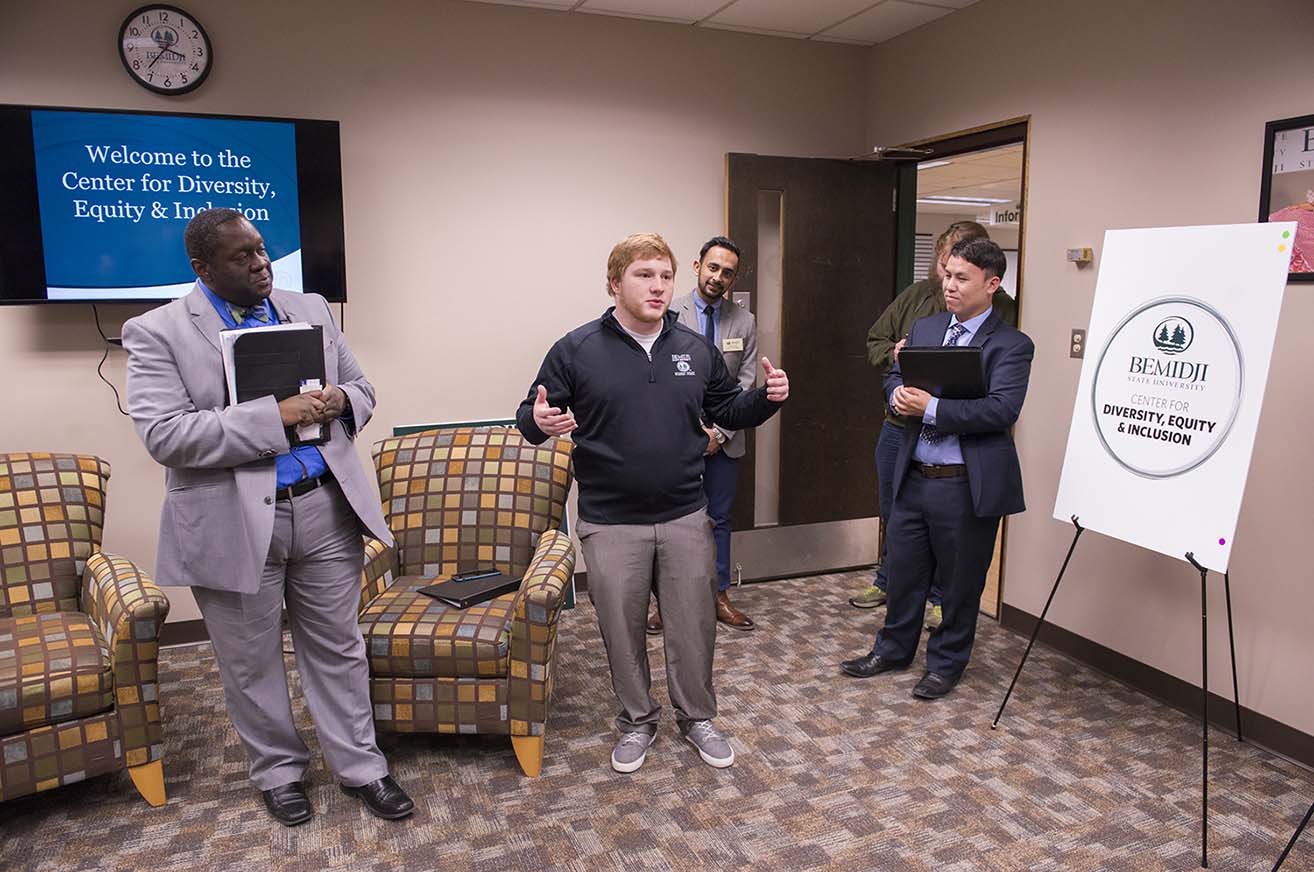 Center for diversity and equity opens in upper Hobson Union

Faculty, staff and students celebrated the opening of Bemidji State’s Center for Diversity, Equity & Inclusion with a ribbon-cutting ceremony on Jan. 11.

The center was established to encourage support and respect for all aspects of campus diversity in keeping with the university’s Shared Fundamental Values of civic engagement and leadership and international and multicultural understanding.

Located in the upper Hobson Memorial Union, it provides a safe and welcoming space for diverse students and student organizations, while encouraging activities and programs that raise awareness of and celebrate difference within the campus and wider communities. 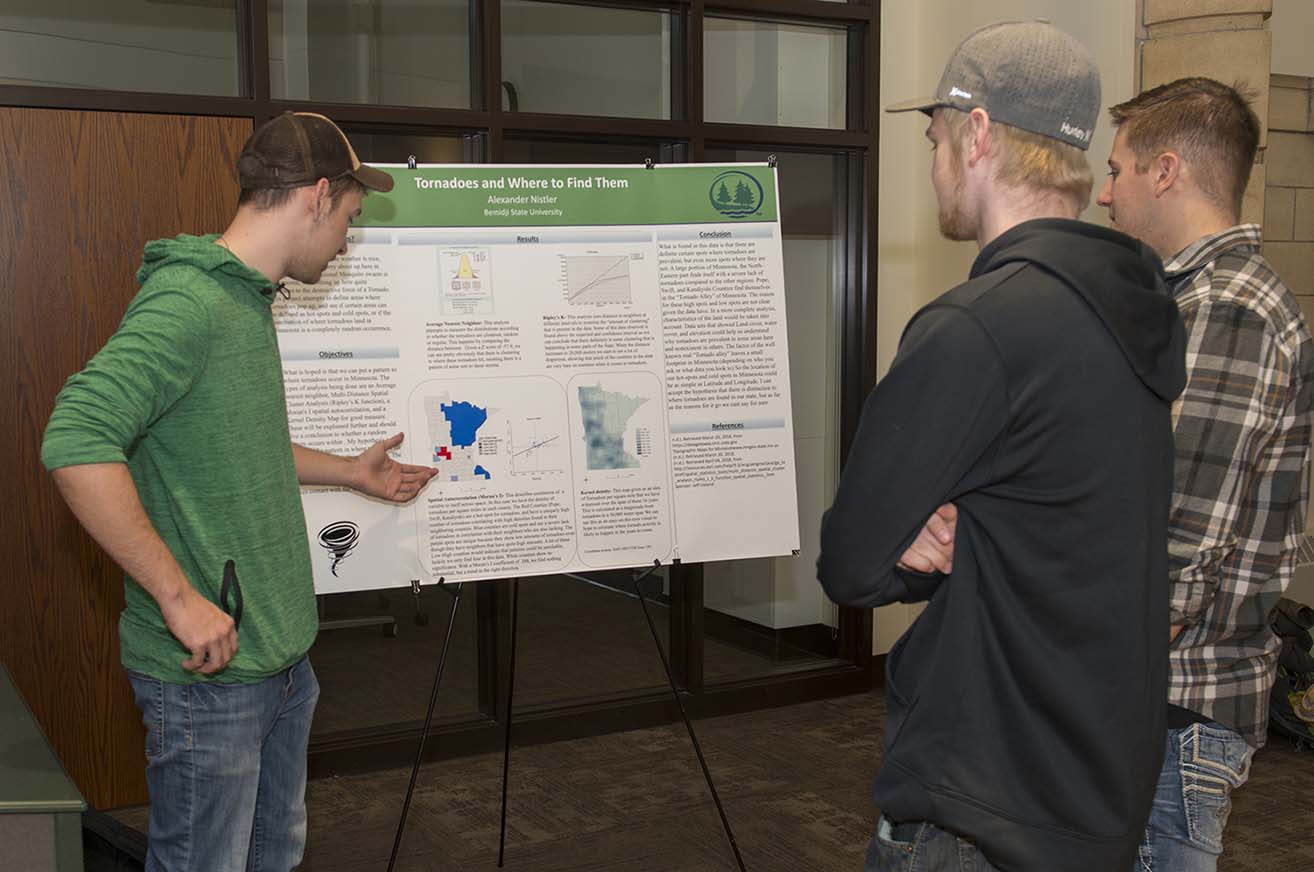 Students shared research on such subjects as U.S. income polarization, live-cell imaging of a protein called TCL, fish house rentals at the BSU Outdoor Program Center, training for bystander intervention in sexual assault cases, and the relationship between student employment and academic success. 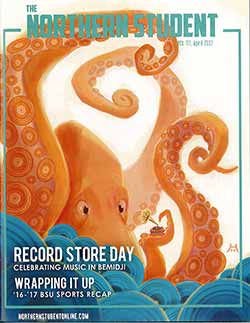 The magazine was recognized for general excellence, and four individuals won awards in the competitive categories of Use of Information Graphics and Graphic Illustrations; Arts & Entertainment Story; and Feature Photo.

These individuals have been appointed to permanent administrative positions over the past six months:

Dr. Jesse Grant was named associate vice president for student life & success in April. He had served as interim dean of students since January 2017. Grant will lead student affairs functions that include the Gillett Wellness Center, Hobson Memorial Union, Housing & Residential Life and the Student Center for Health & Counseling. He also chairs Bemidji State’s Student Success Council, a pilot program aimed at increasing student retention. Grant has 23 years of experience in higher education administration. He has a doctorate in higher education leadership from Western Michigan University in Kalamazoo, a master’s degree in student development in postsecondary education from the University of Iowa and a bachelor’s degree in sociology from Kent State University.

Dr. Joseph Ritter in May was named dean of the College of Individual & Community Health. He previously was provost, dean of academics and the Edith and Lewis White Distinguished Professor of chemistry at Principia College in Elsah, Ill., where in 1995 he began 23 years in academic and administrative roles. Ritter earlier worked in artificial intelligence for Amoco Oil’s research and development department and as a process control engineer and an operations engineer for Whiting Refinery. He has a bachelor’s degree in chemical engineering from the University of Illinois and a master’s degree in computer and information science and a doctorate in chemical engineering, both from the University of Delaware.

Ann Humphrey became the American Indian Resource Center’s first assistant director in March. A member of the Leech Lake Band of Ojibwe, Humphrey came to BSU after three years as admission and outreach coordinator at Leech Lake Tribal College in Cass Lake. She oversaw student recruitment, admissions and outreach, while also working to help students complete their degrees. Humphrey has a bachelor’s degree in vocal music education from the University of Minnesota.

Dr. Cornelia “Corrie” Santos was hired in January as lead faculty member for Niizhoo-gwayakochigewin, a unique academic program that brings indigenous perspectives into environmental sustainability initiatives. She came to Bemidji State from the University of Colorado, where she was a postdoctoral fellow at the Centers for American Indian & Alaskan Native Health. Santos has a bachelor’s degree in biology & chemistry from Metropolitan State University of Denver, as well as a master’s degree in environmental science and a doctorate in education, educational leadership and innovation, both from the University of Colorado at Denver. 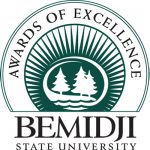 Bemidji State recognized 61 employees with 690 combined years of service, nine faculty members who received emeriti status, 14 retiring staff members and winners of the university’s Awards of Excellence at a campus-wide breakfast on April 26. Award recipients were: