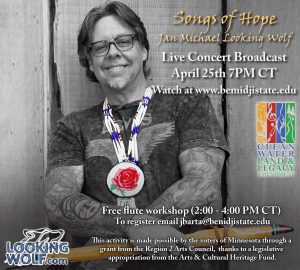 The free virtual workshop and concert are both scheduled for April 25. The workshop begins at 2 p.m. Central time, with the concert beginning at 7 p.m.

Looking Wolf is offering a free flute workshop via the video conferencing platform Zoom for musicians of all skill levels.

While the workshop is free, pre-registration is required by contacting Dr. Jim Barta, dean of BSU’s College of Art, Education & Humanities, at jim.barta@bemidjistate.edu. While the workshop is open to all, priority registration will be given to residents of Clearwater, Mahnomen, Beltrami, Hubbard and Lake of the Woods counties in Minnesota, the region covered by the Region 2 Arts Council. Access information for the Zoom workshop will be shared via email after registration.

Looking Wolf and Robin Gentlewolf, a student apprentice of Looking Wolf who goes by the moniker “RG”, will perform a free concert, entitled “Songs of Hope.” The concert was originally planned to be live in Bemidji but has been moved to a virtual format in response to the COVID-19 pandemic. The two-hour concert will feature music meant to provide lessons on Native American cultures and the importance of the flute — and music in general — to provide medicine needed to soothe and heal.

The workshop and concert are sponsored by Bemidji State University and the Region 2 Arts Council.

About the Region 2 Arts Council

The Region 2 Arts Council is part of a statewide system of 11 councils which receive funding from the Minnesota legislature. In partnership with the Minnesota State Arts Board, the regional councils provide access to the arts to everyone in Minnesota. Each regional council assess arts needs, develops programs and services to meet those needs, and distributes grants to fund arts programs in their regions. In addition to its legislative appropriation, the Region 2 Arts Council receives funding from the McKnight Foundation and the state of Minnesota’s Arts and Cultural Heritage Fund.