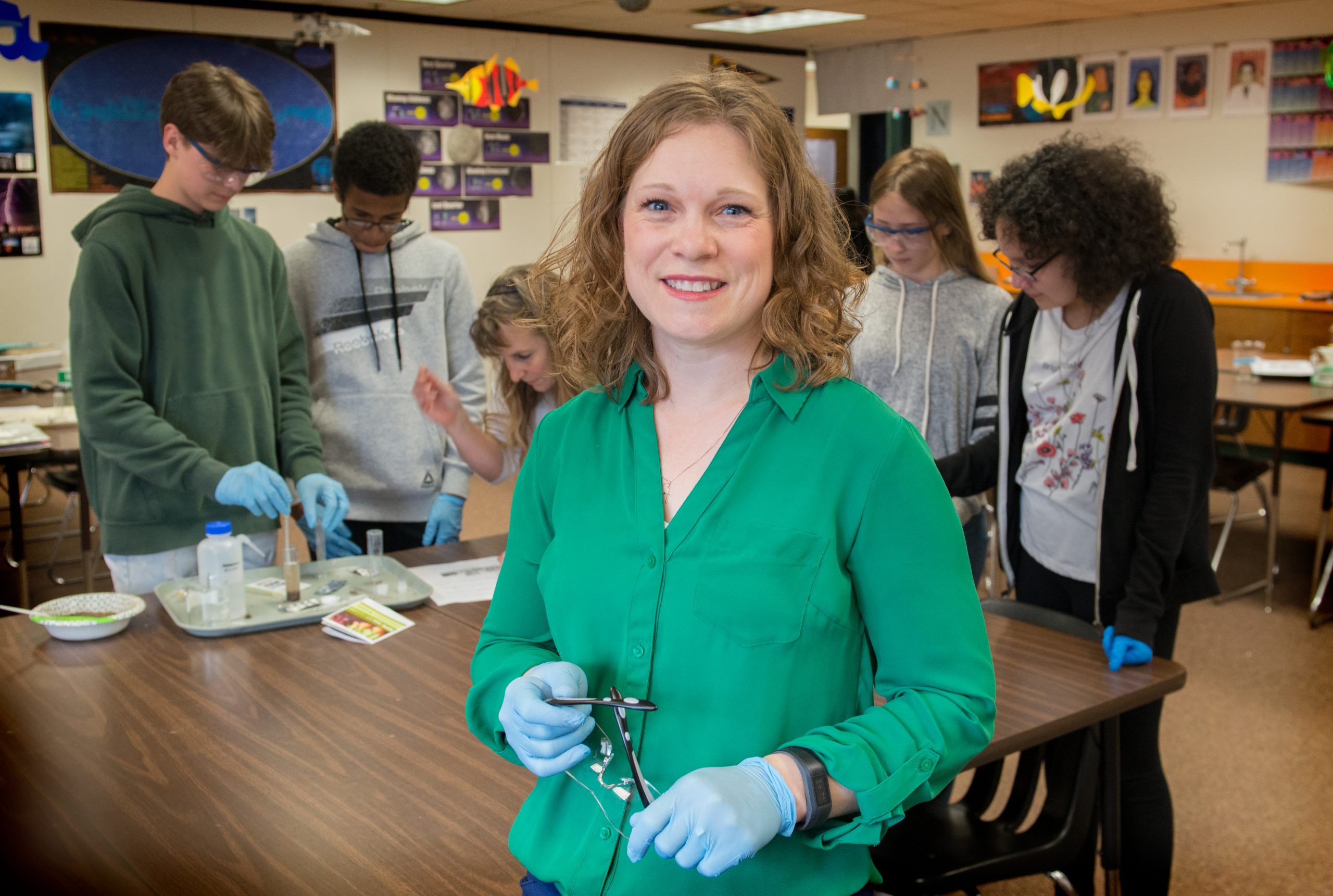 Peterson, along with senior science education undergrads Alec Stark of Little Falls and Garrett Dufault of Fertile, has created a series of
hands-on, environmentally-focused projects for more than 350 eighth graders, which they are sharing with Bemidji Middle School science teachers throughout the 2019–2020 academic year.

“We want to improve attitudes toward science, the understanding of core scientific concepts and the likelihood of youth entering careers in science, technology, engineering and math,” Peterson said. “I want to make science fun and exciting.”

The project is an extension of Peterson’s previous outreach work with Bemidji Middle School sixth graders. Although the project focuses on providing hands-on science experience, it also has cast a light on Bemidji’s poor retention rates in science fields. According to the Minnesota Department of Education, only 47 percent of BMS students meet state science standards  — 6 percent below the state average.

“I want Bemidji youth to capture high-quality learning opportunities in STEM that inspire them to study science — hopefully at Bemidji State — and become scientists,” Peterson said.

Before starting their classroom work, Peterson and her students conducted an initial survey of Bemidji Middle School students to gauge their interest in STEM fields. They will conduct a similar survey in April and compile data in May and June, and Peterson hopes the data will show an increasing interest in science.

“I had to learn how to present and ask questions that would engage the students in class discussions,” Dufault said. “Each day was easier than the last, because I noticed what worked with the students and how to present information to them in a way they would understand and relate to before going into the next class. My favorite part of this research was connecting with the middle schoolers and piquing their interests in the field of science.”

With each curriculum activity, Peterson sought to connect the middle school students with a local scientific environment right outside their back door. During the water phosphate unit, students gathered samples from Lake Bemidji, Lake Irving and the middle school pond. While studying soil, students collected and examined specimens from the middle school’s forest.

Peterson also connected each module with a local expert who could provide a real-world perspective on the topic. Throughout the year, middle school students have met with working professionals from the Beltrami County Soil & Water Conservation District, the Rural Renewable Energy Alliance and Natural Resource Conservation Service.

“We wanted to find community partners to show the students what a scientist with a local job looks like,” she said. “Exposing them to tangible, real-world experiences in science and technology is critical to developing a strong, vibrant work-force that supports the community in the long term.”