Tuesday, Sept. 11, 2001, began like any other day at Bemidji State University. It was the third week of classes, students rushed to class, professors prepared for the flood of eager learners and staff settled into their offices for another day at work.

At 7:46 a.m. the seemingly normal day transformed into one of horror when four full-size airliners hijacked by militants associated with the al-Qaeda carried out suicide attacks against the United States. Two planes were flown into the twin towers of New York City’s Word Trade Center, a third plane attacked the Pentagon just outside of Washington D.C. and a fourth crashed into a Pennsylvania field.

Classes were canceled, campus became eerie and everyone grieved. Much of the campus community gathered in the Lower Hobson Memorial Union watching the news. Nearly 3,000 people lost their lives that day and the whole country felt a vibration of fear and pain in not only the moments following the attacks, but for months and years afterward.

Now, on the eve of the 20th anniversary of the 2001 terrorist attacks, the Bemidji State Office of Communications and Marketing asked faculty and staff to reflect on their 9/11 memories and how the Bemidji community came together to heal. 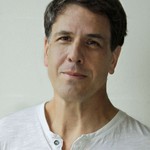 “What I remember most are two things: the silence and a kind of dizziness,” Dr. Mark Lawrence, professor of geography, said.

Lawrence had joined Bemidji State’s faculty nearly a month before and was nestled in his second floor office in the old Hagg-Sauer Hall when the attacks came. In a haze, he went to teach his 8 a.m. class.

“One minute I was bent over in my office chair listening to confused reporters struggling to make sense of the sudden, awful moment, and in the next I was suddenly standing on stage facing my class with no recollection of having gotten up and walked downstairs,” he said.

He told his class he knew what had happened and while it made no sense to hold class that day, he was willing to talk about it with them.

“Professors are used to classrooms going quiet when they ask, “Any questions?” But this was different. No side conversations. No fidgeting with bags, jackets, notebooks. No one left. No one even blinked,“ he said. “I wasn’t even sure they were really there, or that I was really there. It was the silence that comes after the explosion. The silence of a suddenly larger space than had been there before. A big, menacing absence of presence.“ 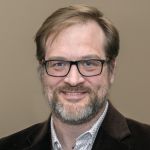 Across campus Andy Bartlett, formerly BSU’s sports information director, was in his office located in the Physical Education building when he heard the news. Now the university’s executive director of communications and marketing, Bartlett – like Lawrence – had been at BSU for a short time before the attacks happened.

“I spent most of the day just reloading CNN’s website and a few others repeatedly looking for new information, and as news was coming in about Flight 92 and the hit at the Pentagon I was looking around for local information from those events as well,” he said. “I took quite a few screenshots that day, even though I don’t remember ever looking at them again. In the moment it just felt like I should save them.”

Meanwhile, Miles Oustad, manager of data integration for the Minnesota State System of Colleges and Universities, was housed in his BSU office at the time of the attacks

“We walked to the union to watch the news on the big screen TVs and actually saw the second plane hit live on the news,” he said. “We watched the towers collapse live as well. I will never forget that day nor those images.” 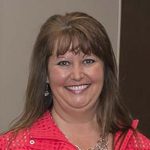 Similarly, Sandy Beck, a former general maintenance worker who is now BSU’s building services manager, was in a residential hall when the attacks started.

“I was walking down the third floor of Oak Hall when a student said ‘come in here look at this! A plane just flew into that building’,” she said. “Other students came running in and we all just stopped and looked at each other. Then the students started calling their parents to ask what is happening. It was so scary.” 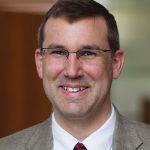 Bemidji State Provost Dr. Allen Bedford was running a chemistry lab at his previous institution just outside of Philadelphia on the morning of 9/11.

“I’ll never forget those hours. Just as we were starting the experiment a physics professor stepped into the lab and said, ‘Interesting things are happening in the world — an aircraft just hit the World Trade Center.’ We turned on a television nearby that didn’t have an antenna or cable but we saw a very grainy picture showing smoke billowing up off both towers,” he said. “We all, faculty and students, stood together in the lab trying to process what we were seeing and hearing, which became even more difficult as in that grainy, barely discernible picture, we saw one and then the other tower collapse.”

In the days after the attack prayer vigils were held on and off campus bringing both students and members of the Bemidji community together to honor those helping in the aftermath of the assault and grieve for those who perished.

Many of BSU’s student organizations jumped into action to support not only their peers, but the organizations dedicated to offering relief aid to survivors and those in the line of duty at ground zero. Messages of love and hope lined the walls of the Hobson Memorial Union, a display soliciting donations was erected for students to learn how to help and a community message board was installed for the BSU community to reflect on the tragedy as a whole. Bemidji State administrators also held open forums for students, faculty and staff to ask questions, share experiences and process the violence together.

As a sign of solidarity, international students attending Bemidji State at the time participated in a flag march where they carried the flags of their home countries from Linden Hall to downtown Bemidji in a display of protest against the violent act of terrorism. Russian student Dmitry Perevozov was among the international students who marched that day.

“We were like a giant wave. A living chain, connected with one desire and one purpose. International students gathered to show spiritual support toward Americans,” Perevozov wrote in the Northern Student, BSU’s monthly student-run magazine. “We are foreigners in the U.S. but we do understand its sorrow. Deep sorrow of those who had lost someone; a relative, a friend.”

At the one year anniversary of 9/11, Country Music Award- and Grammy Award-winning band The Nitty Gritty Dirt Band performed a benefit concert at BSU’s John Glas Fieldhouse and donated all proceeds to local fire departments, sheriff’s offices and police departments around Bemidji and Beltrami county.

“We wanted to do something good on the night of 9/11 to say thanks to local emergency services. Because we can,” the band said.

Today Bemidji State has two lasting memories of the events. The first is a permanent memorial that sits between Bensen Hall and the Chet Anderson Stadium. The monument features four pillars comprised of ceramics that detail student perspectives of the attack and a swing bench hangs in the center of the piece. 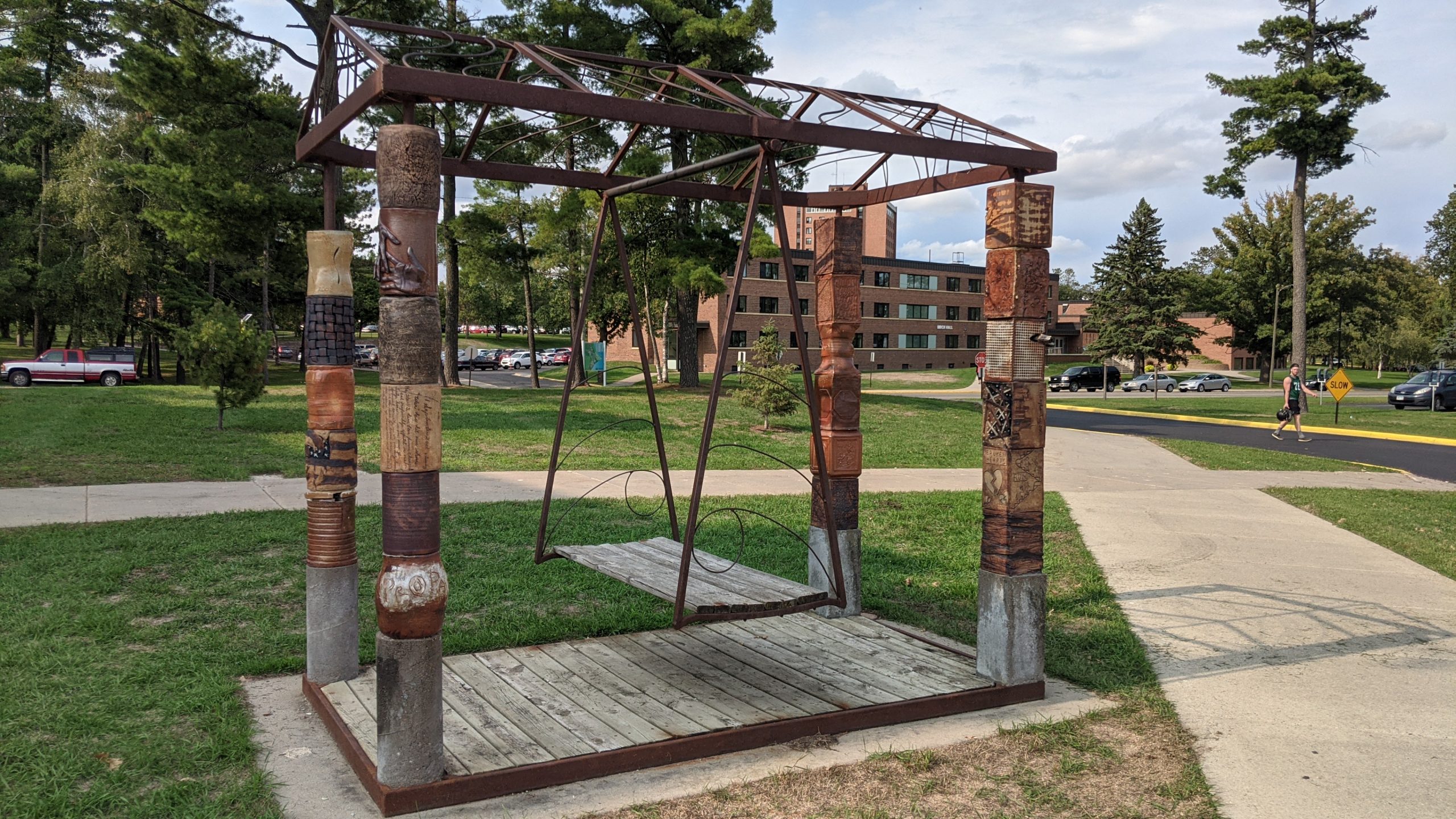 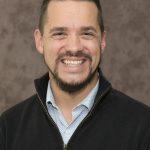 Mitch Blessing, now associate professor of technology, art and design, was an undergraduate student completing his bachelor of fine arts degree at the time when the memorial was being constructed.

“Associate Professor Steve Sundahl suggested to his advanced ceramics class that they make something as a group,” Blessing said. “He offered to build a simple gable structure, a home, or a temple or whatever was needed, and each member of the class could make two cylinders of similar height that could be stacked to create the four pillars. Each student was allowed to alter or decorate their basic shapes any way they wanted as long as they remained sturdy and stackable.”

Though Blessing was not one of the student contributors, he closely watched the efforts of his peers to construct the monument.

“One student threw plain cylinders on his wheel, let them dry partially, then took them out in the woods and shot through them with a gun, an effective expression of the violence of the attack,” Blessing said. 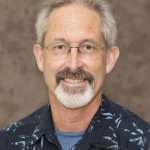 Sundahl worked closely with Bemidji State administrators on site preparation and the installation became a community effort. Later, the idea of creating a healing and peaceful space within the sculpture led to the addition of the swing seat you see now, Blessing said.

“It is one of the great advantages of outdoor sculpture, often rendered in durable materials like steel and stone and ceramic, that it will outlast much of what is spoken, written and printed. I don’t recall much of what was said around campus, or circulated over email, or written in the Northern Student that fall, though I am sure some of those things have been archived,” Blessing said. “I do see this sculpture memorial every day though and I think it has served us well as both a reminder of the pain and as a symbol of hope and goodwill. If nothing else it has been an invitation to have a comfortable sit down for anyone who needs it during these 20 past years. That alone is no small thing.”

The second lasting memory became a tradition in 2017 when the Bemidji State’s women’s basketball team began it’s annual “343 workout” under the direction of Coach Chelsea DeVille. The workout features 343 workout repetitions, commemorating the lives of the 343 firefighters who died rescuing civilians from the twin towers. 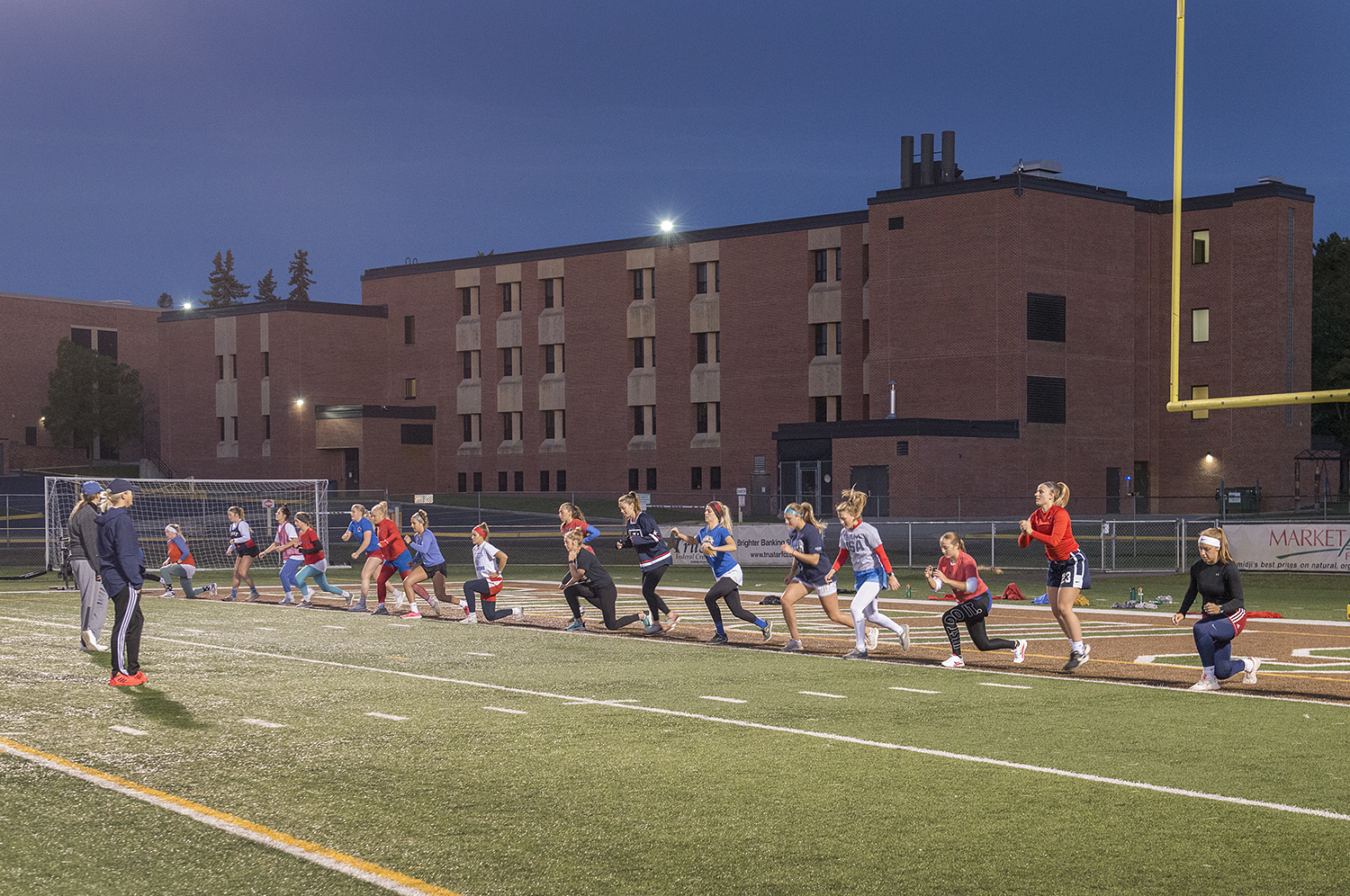 BSU Women’s Basketball Team 343 workout commemorating the lives of the 343 firefighters who died rescuing civilians from the twin towers.

The workout was held this year at 6:30 a.m. on Sept. 9 at the Chet Anderson Stadium. During the reps, Jamie Schultz, woman’s basketball assistant coach, discussed the importance of honoring the memory of those who sacrificed their lives that day. 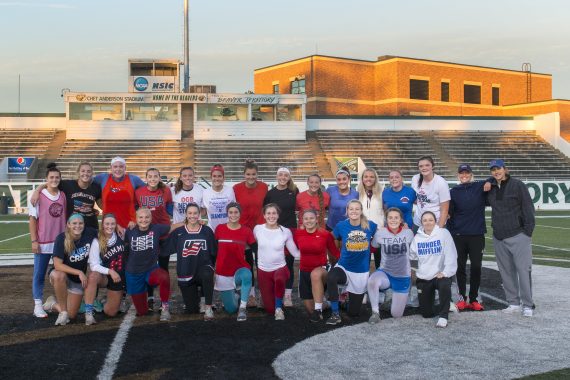 Though born just over a year after the attacks on 9/11, freshman Alayna Suprenand from Fond Du Lac, Wisconsin, said she is motivated to push herself through the intense workout because of the events from 20 years ago.

“I have friends and family in the military,” she said. “You get tired out there, but you think about the who and the why you’re are doing it and it really drives you to keep going.”