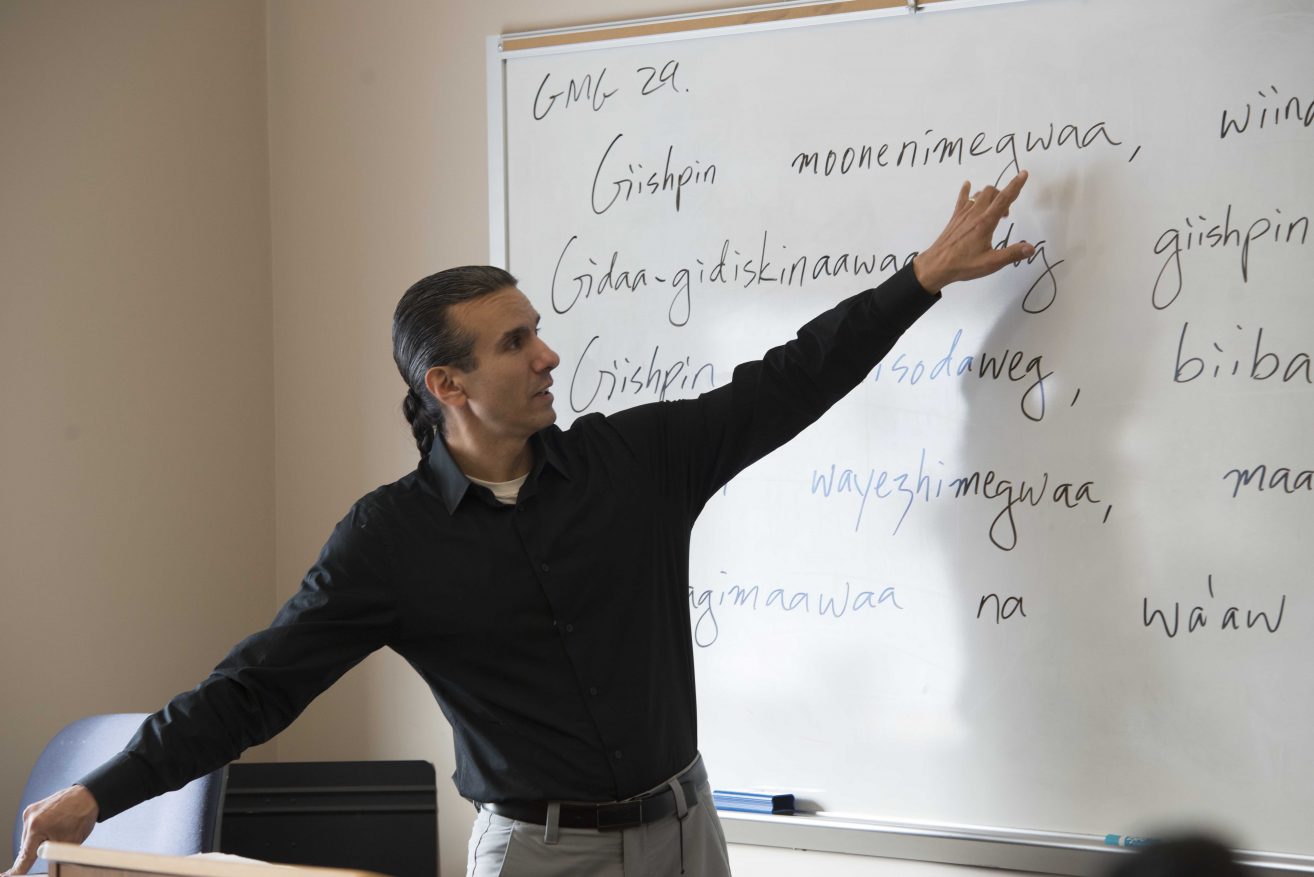 Since 2018, Bemidji State University’s Dr. Anton Treuer, professor of languages and indigenous studies, has worked closely with the Mille Lacs Band of Ojibwe to create resources for Ojibwe language learners through the Aanjibimaadizing Language Preservation Initiative.

The initiative, whose name translates to English as “Changing Lives,” is designed to create new literature for Ojibwe language learners. With Treuer at the helm as managing editor, sixteen Ojibwe speakers teamed up with linguists, teachers and Ojibwe language experts to create five books presented entirely in Ojibwe.

The book series is published by the Minnesota Historical Society Press and includes the following titles for a range of reading levels.

The books were also edited by Michael Sullivan Sr., the resident linguist for the Waadookodaading Ojibwe Language Immersion School in Wisconsin’s Lac Courte Oreilles Tribal Nation. The series was illustrated by Wesley Ballinger, a Mille Lacs Band of Ojibwe artist who is also the community engagement coordinator for the American Indian Studies Department at the University of Minnesota.

In addition to the book series, the Aanjibimaadizing Language Preservation Initiative is working to develop a Rosetta Stone language learning program.

“The language team in Mille Lacs will be developing all of the curriculum tools. The scope, sequence, objectives, outcomes and assessment will all be developed by Ojibwe speakers here in Mille Lacs,” Treuer said in an interview with the Band.

Treuer went on to emphasize that the Rosetta Stone platform will be utilized to complement what is developed by Ojibwe speakers.

“We won’t be smashing the Ojibwe language into English thought patterns or some cumbersome, foreign technological interface,” he said. “Those things will just be there to supplement and augment what our speakers know and to teach the language with our though patterns, our values, our way.”

“When it’s done, Rosetta Stone will be a historic tool. It will never replace our speakers. It won’t replace, nor will it be a silver bullet to save our language. It will be a tool in the arsenal that will help who’s alive speaking Ojibwe right now to teach people for hundreds of years to come.

Treuer also has two additional books written entirely in Ojibwe available for pre-order now. “Awesiinyensag” was authored by a team of twelve Ojibwe language speakers and illustrated by Ballinger while “Naadamaading” was authored by a team of eleven speakers and illustrated by Ojibwe artist Jonathan Thunder. Thunder is a member of the Red Lake Nation in Minnesota and is a multidisciplinary artist and the illustrator of the best-selling children’s book Bowwow Powwow.

An internationally renowned expert on cultural and language preservation, Treuer has authored 19 books and is a professor in the Department of Languages and Indigenous Studies at Bemidji State University. His book, “Ojibwe in Minnesota,” was named Minnesota’s Best Read by the Center for the Book at the Library of Congress in 2010. He edited “Awesiinyensag: Dibaajimowinan Ji-gikinoo’amaageng,” an Ojibwe-language children’s book that was named Minnesota’s Best Read for 2011. And In 2012, he won the Award of Merit from the American Association of State and Local History for his book, “The Assassination of Hole in the Day.”

At BSU, Treuer teaches courses on Ojibwe language, culture, history and literature. Before joining the BSU faculty, Treuer spent four years as an assistant professor of history at the University of Wisconsin-Milwaukee.

Treuer is a member of the Minnesota State Arts Board and has served on the boards for the White Earth Land Recovery Project and the Sanford/MeritCare health system. He has received dozens of awards and fellowships from organizations including the American Philosophical Society, the National Endowment for the Humanities, the National Science Foundation, the MacArthur Foundation, the Bush Foundation and the John Simon Guggenheim Foundation.

Treuer has a bachelor’s degree from Princeton University and holds master’s and doctorate degrees from the University of Minnesota.