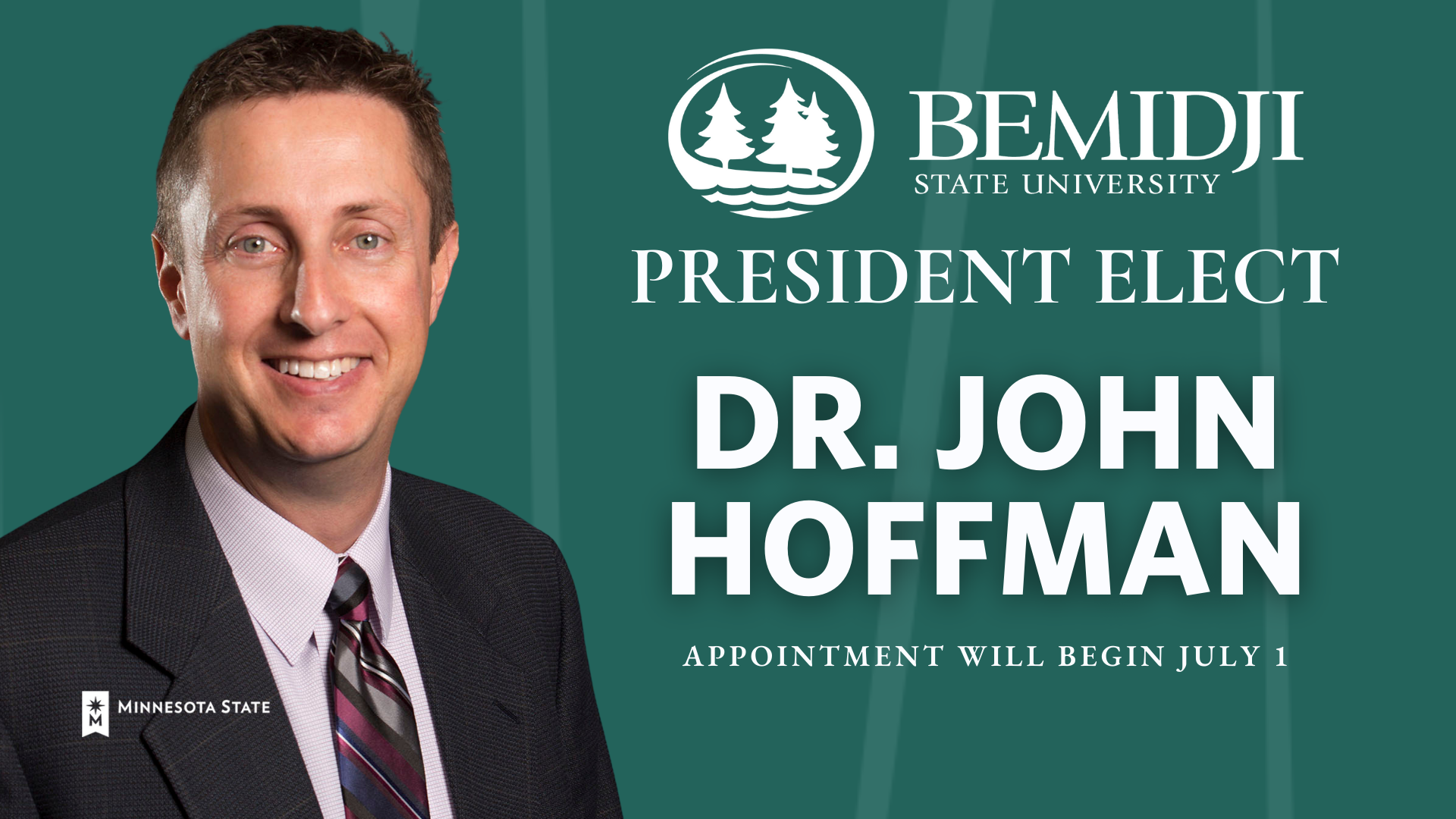 Dr. John Hoffman was presented as the president-designate of Bemidji State University and Northwest Technical College at a March 17 meet and greet on campus. More than 200 faculty, staff, students, administrators and members of the Bemidji community attended.

After the recitation of the BSU land acknowledgement, Minnesota State system of colleges and universities Chancellor Devinder Malhotra and Hoffman were introduced by President Faith C. Hensrud, who announced in August 2021 that she would retire this summer after a six-year tenure as BSU/NTC president.

Hoffman was recommended to the Minnesota State Board of Trustees by Malhotra this week. The board approved the recommendation by a unanimous vote on March 16.

During the March 16 Board of Trustees meeting, Malhotra called Hoffman an accomplished and strategic leader who understands that building an empowering ethos for faculty and staff is critical for both institutions.

“Personally and professionally, Dr. Hoffman is strongly committed to diversity, equity, and inclusion, and fully understands Equity 2030 as a unifying framework and organizing principal of student success,” Malhotra said. “He exhibits through his work great leadership traits and has prepared himself well through both experience and expertise to assume the presidency of Bemidji State University and Northwest Technical College.”

Hoffman has served as the vice chancellor for academic and student affairs at the University of Minnesota Crookston since 2018. In 2021, he also assumed duties as acting senior vice chancellor. His responsibilities have spanned academics, student affairs and enrollment management. His signature career accomplishments have included implementing multi-faceted student success programs credited with increasing student success and retention rates, reducing the first-year retention rate disparities between Black and Indigenous students and students of color and their white counterparts, and increasing performance on two-thirds of core learning outcomes for all students during their first year of college. 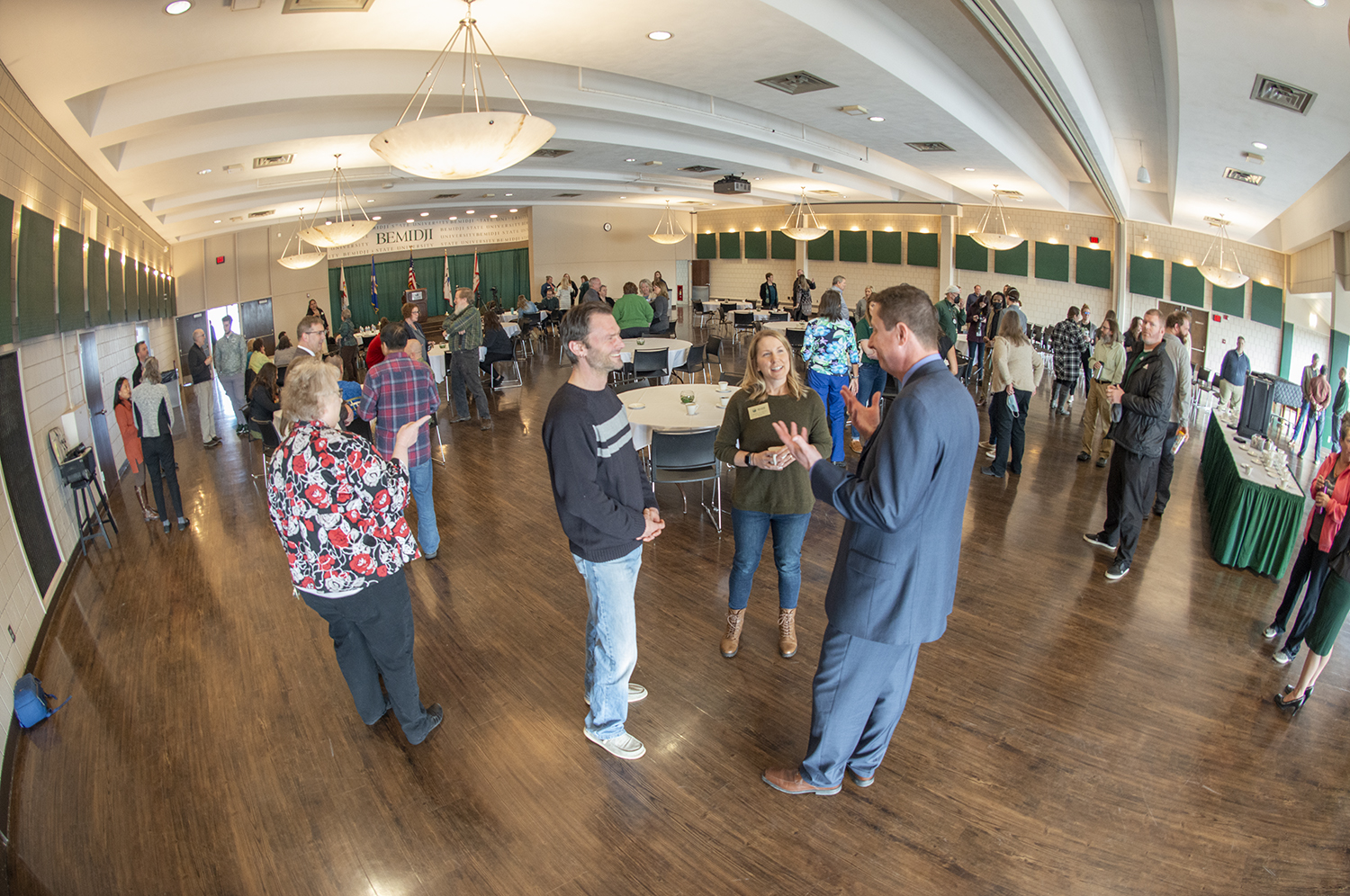 “I’ve tried to craft a mission over the last 25-30 years of my career — a northern star — of advancing holistic student success that is grounded in equity and inclusion. You embody that so well,” Hoffman said. “This institution is a comprehensive, regional university grounded in liberal arts and professional studies attending to the whole student. Learning is not just what happens in the classroom, it’s what happens outside the classroom. It’s about transforming the lives of students and ensuring that transformation is grounded in equity and inclusion.”

In his remarks to campus, Hoffman emphasized Bemidji State’s work to support underrepresented students and his plans to continue bolstering the university’s efforts.

“You can help the nations and beyond understand the opportunity that comes with learning from one another in humility by continually asking of others, ‘what do you see that I don’t?’,” he said. “That is an element of humility that our society needs much more of these days. I’ve decided to be here because of your commitment to do just that , and to advance that in the future of this campus and the region.”

Previously, he held faculty and a variety of administrative positions within the California State University between 2004 and 2018 including chair of the Department of Educational Leadership and director of the Doctor of Educational Leadership Program. Over 10 years at Cal State Fullerton, he earned tenure and advancement to full professor, and his leadership contributed to significant diversification of the faculty, significant enrollment growth including increases in the racial and ethnic diversity of students, and enhanced graduation rates with no measurable achievement gaps by race or gender.