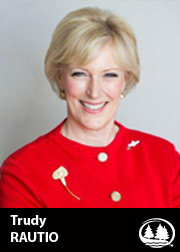 First presented by Bemidji State in 1981, the Distinguished Minnesotan Award acknowledges the contributions of current or former residents of the state who have performed exemplary service to the people of Minnesota or the United States.

The Distinguished Minnesotan award was presented annually from 1981-2009, and was not awarded in 2010 or 2012. The honoree traditionally gives Bemidji State’s commencement address. The university’s 95th Commencement ceremony will be held May 9 at the Sanford Center in Bemidji.

She has earned a number of accolades for her leadership, receiving honors including the 2009 Minneapolis/St. Paul Business Journal chief financial officer of the year for large private companies and Woman Changemaker recognition in 2005. She was the inaugural recipient of the Girl Scouts of America’s Women of Distinction award in 2009 and was named an Outstanding Alumni at Bemidji State in 2007. She also received the Corporate Woman of Achievement award from the National Association of Women Business Owners’ Minneapolis Chapter in 2004. In 2003, Rautio received the Carlson Fellows award, the company’s highest career achievement honor.

Prior to joining Carlson, Rautio was senior vice president and chief financial officer of Jostens, Inc., and vice president of finance for Pillsbury Co.

She chairs The Rezidor Hotel Group and Carlson Wagonlit Travel board and serves on the board of directors for Carlson, Securian Holding Company, Imation and the Bemidji State University Foundation.

Rautio earned her undergraduate degree in accounting from Bemidji State and holds an MBA from the University of St. Thomas. She is a certified public accountant and a certified management accountant.

Visit Bemidji State University’s Commencement for more information about the May 9 ceremony.