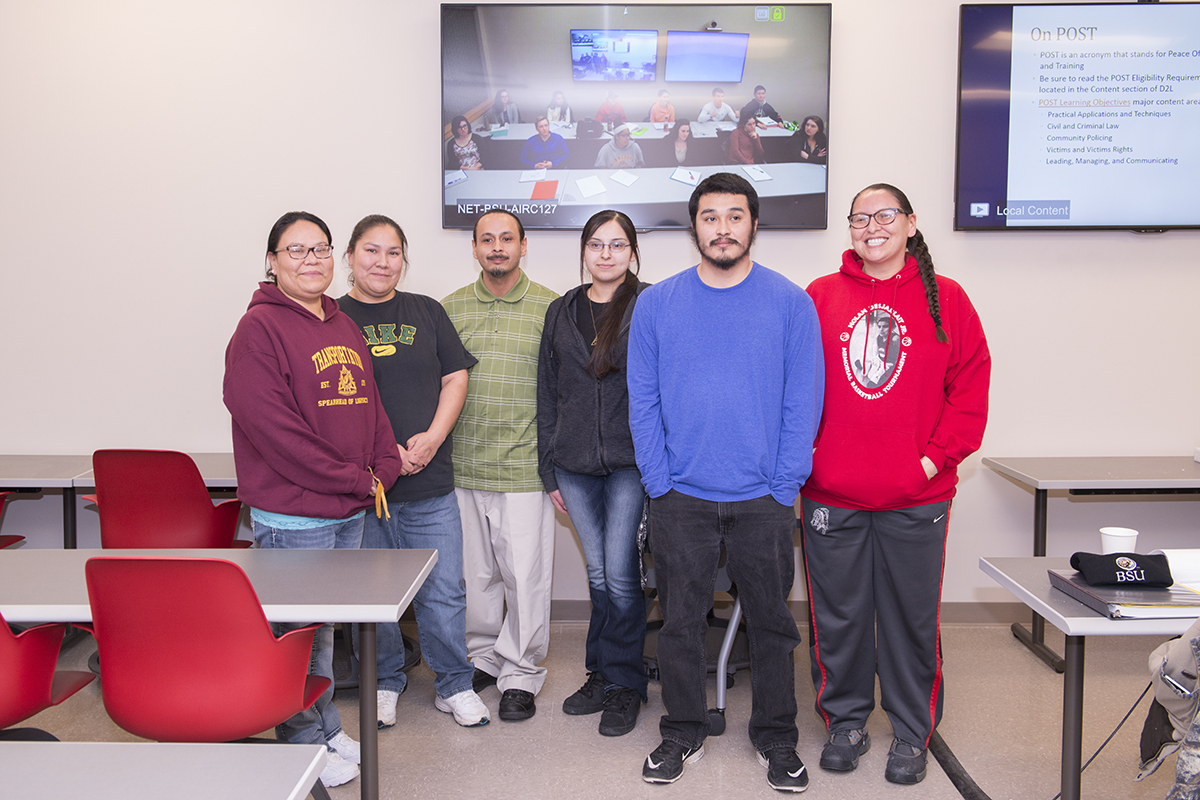 A unique partnership is allowing students at Red Lake Nation College in Red Lake, Minn., to take a Bemidji State University course in the familiar surroundings of their home campus.

“We have had professors in the past who have done adjunct work at tribal colleges, but we have never actually offered a BSU class on a tribal college campus,” said Bill Blackwell, Jr., executive director of Bemidji State’s American Indian Resource Center. “There are a few disciplines that come up all the time when we talk to the tribal colleges about their needs, and certainly criminal justice is one of them.”

Blackwell said the BSU course closely mirrored a similar course offered at Red Lake, making it an ideal candidate for this pilot.

Dan King, president of Red Lake Nation College, has been closely involved in the partnership. He sat in on the first few class sessions on the Red Lake campus and saw first-hand the opportunity that the technology presents for his college’s students — and the possibilities it creates for the future.

“It has a lot of potential,” he said of the partnership. “We have many students here in Red Lake who complete a two-year degree and then they don’t continue. The distance barrier is too big of a challenge — they’re working part-time or they have children, and there are too many barriers. This virtual presence opportunity removes the distance barrier for a lot of our students.”

Hagensen said that while the BSU students in the course are more traditional-aged college students, the Red Lake students are mostly working adults with children. As Red Lake’s semester schedule differs from BSU’s by about a week, she used the first few class sessions to focus on unifying the students.

“It’s two different kinds of students coming together — so there’s not just an ethnic diversity between the two groups, there’s an age difference between two very different types of students,” she said. “We took the first two weeks to dive into what critical thinking is, get to know each other and play some games to get used to the technology.”

She used the game Scattergories as an icebreaker, playing the game as a collective group during the first few class sessions after the class had worked together to establish house rules and determine how points would be counted.

“It definitely ensured that we had to have a lot of conversation back and forth,” Hagensen said.

From there, Hagensen has been making small changes to her usual style for teaching the course to a single classroom group at BSU to adapt to the realities of teleconferenced coursework – from where to stand so she can be seen and understood by students on both campuses, to how to structure her own presentation and guide classroom conversations to account for the classes being recorded for future viewing.

So far, the students have overcome the occasional technological hiccups and are enjoying the course.

“The experience is the same other than the TV,” said Red Lake student Leah Kingbird. “I think there should be more of it. It’s a great opportunity.” 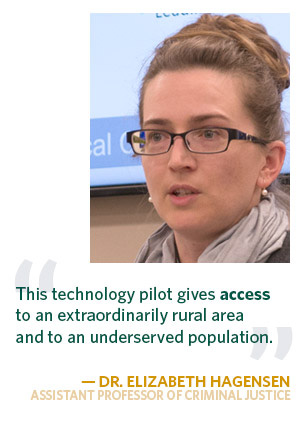 The collaboration is made possible by a teleconferencing network that connects Bemidji State with Red Lake Nation College as part of a consortium called “Azhoogan” – an Ojibwe word meaning “bridge” – which also includes Northwest Technical College in Bemidji, Minn.; White Earth Tribal and Community College in Mahnomen, Minn., and Leech Lake Tribal College in Cass Lake, Minn. The consortium began developing the network in 2014 using a $500,000 grant from U.S. Department of Agriculture’s Distance Learning and Telemedicine Program.

“The technology has allowed us to really step out of the box a little bit and think about what we want to do as far as delivery goes to some of the remote communities we service,” Blackwell said.

King, too, sees the potential for a new era of collaboration between the Azhoogan partner institutions being built on the foundation established by the criminal justice pilot program.

“This can remove the distance between the colleges for the benefit of everyone,” he said. 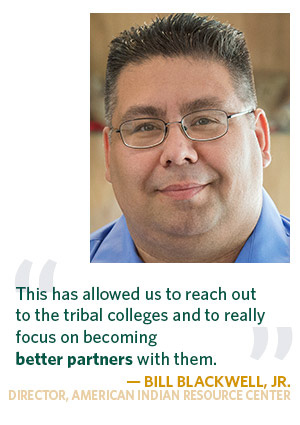 For her part, Hagensen said the technology is allowing Bemidji State to reach students who previously may not have had access to a four-year baccalaureate education.

“This technology pilot gives access to an extraordinarily rural area and to an underserved population,” she said. “It creates better partnerships and it extends Bemidji State into rural communities that have difficulty with access to lots of different types of services.”

In providing that access, Blackwell says the criminal justice pilot is showing what might be possible by exploring creative ways to expand on the concept.

“This has allowed us to reach out to the tribal colleges and to really focus on becoming better partners with them,” he said. “In the future, maybe we can deliver years three and four of certain programs to them without their students ever having to leave their home communities.”