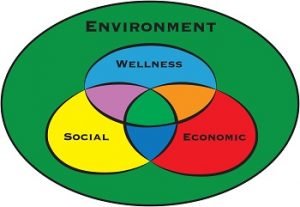 When the Sustainability Office was created in 2008, students and staff immediately realized the work they felt called to do  required a different framing. The traditional sustainability model seemed limiting and failed to engage the entire campus. Office staff were busy partnering with a diverse array of groups across campus, including the Track and Field program and the Theatre Department. Traditional sustainability work seemed overly focused on recycling and efficient lighting and other facilities-focused efforts.  The sustainability connections to racial equity and social justice seemed insufficient at garnering the broad support needed to make a significant impact on a collective understanding of human’s responsibility to the Earth.

Two central themes emerged as BSU began to think deeply about sustainability work. Our understanding of one theme emerged as we realized we must not only take care of each other and the Earth, but also ourselves.  Too many sustainability staff were getting burnt out. Colleagues were not sleeping well and were not making time for physical activity. Anxiety levels were high. We began wondering about the impact this lack of self-care would have on our responsibility to be good role models and stewards. It felt imperative to emphasize the importance of individual wellness in this new sustainability model. Not only is it important to ride a bicycle because it is less expensive and less polluting – it is also better for an individual’s health when compared to driving an automobile. Integrating stand-up desks is important to maintaining proper workplace posture and movement. Consuming organic food is better for soil health, local ecosystems, and the human body. Over time, our definition of wellness has expanded to include the wellness of an organization or community and considers non-human elements.  For example, when considering projects, it is beneficial to ponder the “wellness” of water, a spider, or a lakeshore buffer zone.

The second theme emerged as we considered altering the portion of the Venn diagram traditionally representative of the environment.  Instead of being an equal counterpart to the social and economic aspects of the human reality, it made sense to have the environment as “all encompassing”.  The environment is not dependent on us; we are dependent upon it.  Indeed, we are part of it.  This belief is strongly emphasized by the Indigenous communities embedded in and surrounding Bemidji, which is geographically located between the three largest Ojibwe nations in Minnesota.  According to Ojibwe legend, the Great Spirit first created the physical world of sun, stars, moon, and earth, and then the plant beings. After plants came the animal beings, of which there were four-leggeds, wingeds, and swimmers. Last of all, the Great Spirit made man. Man was last in order of creation, least in order of dependence, and weakest in bodily powers, yet man had the power to dream. The Great Spirit then made The Great Laws of Nature for the well-being and harmony of all things and all creatures. The Great Laws govern the place and movement of sun, moon, earth, and stars; govern the powers of wind, water, fire, and rock; govern the rhythm and continuity of life, birth, growth, and decay. All things live and work by these laws.1

This way of thinking about humans’ roles and responsibilities as members of an interconnected community of life greatly shapes sustainability work at BSU.  An economy is not just humans exchanging goods and services, but the entire web of relationship and reciprocity upon which all life depends.  Trees share nutrients with other trees.  Wolves feast on beavers and thus manage the wetlands. In a similar manner, the societal aspect of the traditional Venn diagram is not just referring to humans.  It refers to interactions between all beings.  A turtle rests on a rock.  A lightning bug does a special dance to attract a mate.  Society is complex and beautiful, and we are a part of it all.

Every action should be evaluated regarding its impact on people and the planet. At Bemidji State University, we consider a person’s individual well-being as well as the well-being of the surrounding community of life. We welcome feedback and encourage the use and sharing of this model.

Feedback about this webpage.
Sustainability